To commemorate the 80th anniversary of the victory of the Red Army’s Long March and American journalist Edgar Snow’s visit to Bao’an (now Zhidan County, Yan’an City), China Society for People’s Friendship Studies (PFS) , Peking University and Edgar Snow Memorial Foundation co-hosted the 17th Edgar Snow Symposium in the afternoon of October 12, 2016 at the PKU campus, where Edgar Snow, a great friend of the Chinese people, used to work.

At the Symposium, Li Qingxia, the Editor-in-chief of Beijing Publishing Group, briefed on the series of China in the Eyes of International Celebrities co-edited and published with China Center for Edgar Snow Studies, Peking University. Yuan Xiling, School of Foreign Languages, Northwest University, shared the activities carried out by Edgar & Helen Snow Studies Center, Northwest University. Bao Shixiu, Executive Council of PFS, delivered a keynote speech on Edgar Snow’s coverage and report of the Red Army’s Long March. American scholar John James Kennedy briefed on the Edgar Snow Memorial Foundation’s planning of the global exhibition for the 80th anniversary of the publishing of Red Star Over China. Hollywood director Tim Considine shared his 1979 visit to China with Helen Foster Snow and the stories of Edgar Snow and Helen Snow in China.

The symposium was attended by 43 scholars and students from the United States, as well as executive councils of PFS and representatives of the faculty and students of Peking University. The symposium was presided by Sun Hua, Secretary of the CPC Committee of Yuanpei College, Peking University, and Deputy Director and Secretary General of China Center for Edgar Snow Studies. After the symposium, the participants laid a wreath in front of the tomb of Edgar Snow.

On October 19, 1973, part of Edgar Snow’s ashes were buried by the Weiming Lake at Peking University, as he wished during his lifetime: “I love China, I should like part of me to stay there after death as it always did during life.” He was devoted to promoting Chinese culture and improving China-US relations all his life, forging an indissoluble bond with Peking University. In early 1934, Snow was invited to be a lecturer in the Department of Journalism, Yenching University, as a reporter for the Newsday in China. His journalism course was very popular among students. As he started to work at Yenching University, he asked Xiao Qian, who was studying at the Department of Journalism, to join him in translating and editing a collection of modern Chinese short stories Living China. They told stories about what was going on in China to the West through these novels. Snow cared very much about China’s well-being, and supported and protected with enthusiasm the patriotism of the students. His home was also frequented by many patriotic and progressive students. Following Snow’s suggestion, Students’ Self-Government Association of Yenching University held a press conference for foreign journalists, in which the students demonstrated the great significance of the December 9th Movement to the West. At the end of October 1936, after returning to Peiping from the Shaanxi-Gansu-Ningxia Border Region, Snow enthusiastically shared his experience in northern Shaanxi with the young students of Peking University, Tsinghua University, and Yenching University. In Lin Hu Xuan, he played the footage and slides he took that reflected the life in the Soviet area, and showed photos. Thanks to him, youngsters in the Kuomintang-controlled areas saw the images of the Red Army leaders such as Mao Zedong, Zhou Enlai, and Peng Dehuai, knowing “China under the Red Flag”. In Yan Yuan (the campus of PKU), Snow completed the writing of Red Star Over China. After the founding of the PRC, Snow came to Beijing in June 1960, and came to Peking University to meet teachers, students and old friends. He stayed for 5 months. In his book The Other Side of the River published in 1963, he wrote: “National Peking University used to be the most important, as it cultivated the most important founders of the CPC. Today, Peking University is a place that attracts ambitious students and graduate researchers in art and science.” In 1964, Snow visited China again, returned to Yan Yuan to meet professors and PKU students. Thanks to his special bond with Peking University, he built profound friendship with teachers and students of Peking University.

With Snow’s legendary life, considerable literary and journalistic achievements, and his important role in the history of China-US exchanges, the Edgar Snow studies look like mineral reserves with huge resources, attracting successive scholars who come to have dialogues with Snow’s life experience. “Edgar Snow Studies” becomes a much-talked-about topic. On the 90th anniversary of the founding of the CPC in 2011, Peking University published the book Edgar Snow: Witnessing China, summarizing the main outcomes of many international academic conferences on Edgar Snow studies since the establishment of the Center more than a decade ago. It is found that Edgar Snow studies in China have been deepening and expanding: first, the themes of the conferences have continued to deepen; second, the disciplines involved in the studies have become increasingly diverse, with the encouraging trend of growing interdisciplinary nature covering history, communication, international relations, comparative literature, etc. In addition, a young generation of scholars are emerging, and an increasing number of master’s and doctoral students choose Snow studies as the subject of their dissertations, which demonstrates the time-honored academic importance of Snow studies.

To better familiarize the college students with the contribution of international friends to China’s revolution and development, Peking University offered a selective course for students majoring in Journalism Seminars by Veteran Journalists based on Edgar Snow studies, inviting the children and grandchildren of international friends to host lectures on the historical role of well-known international friends. These lectures helped students learn to use the theory of journalism to conduct observation and analysis, develop their interest in the study of international friends, and improve their journalistic attainment. The students interviewed well-known international friends and their children, and edited and published the Chinese and English versions of Fulfilling Dream in China: Record of China-U.S. People-to-People Exchange. Peking University also co-hosted with American universities commemorative and academic activities for international friends with greater participation of university students, striving to help young people play a key role in nongovernmental diplomacy and people-to-people exchanges. In 2011, the Student Art Troupe of Southern Utah University went to Wuhan to perform a large song and dance drama The Dream of Helen Foster Snow. In 2014, the China-West Exchange Concert was held in the Peking University Hall. An outstanding performance was presented by Orchestra of Southern Utah from Helen Foster Snow’s home state, Yuanpei College, School of Arts and Chinese Music Institute from Peking University, showing Chinese and western musical elements. These exchange activities have allowed more young people to play a key role in nongovernmental diplomacy and people-to-people exchanges. By integrating different cultures, knowing each other’s stories, and transcending the stereotypes and misunderstandings that often separate us, these activities have enhanced communication and become a driving force for deepening international relations.

More than 70 years ago, Edgar Snow told the story of a real China to the rest of the world, enabling the world to set its sights on China. His goal was to enable more foreigners to better understand China, a country with different cultural backgrounds and political systems. We are here today to commemorate Edgar Snow, and to carry forward the spirit of international friends and let people in more countries understand the development and changes in today’s China. Comrade Mao Zedong once said: “Mr. Snow is a friend of the Chinese people. He worked tirelessly for and contributed greatly to the friendship between the Chinese and American people throughout his life. He will always live in the hearts of the Chinese people.” The contemporary scholars of Peking University are following the path pioneered by Mr. Snow, continue to promote and show China’s development and progress to the world, strive to enhance mutual understanding between people of the world and the Chinese people, and make new contributions to the promotion of the friendship between China and the rest of the world and the world’s lasting peace. 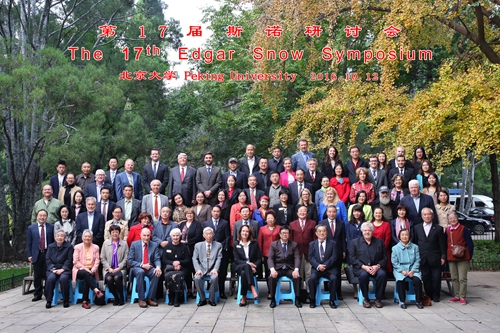 Group photo of the symposium